Blackshark.ai is presenting at I/ITSEC

Blackshark.ai is presenting their end-to-end Geospatial Analytics and 3D Synthetic Environment Platform at I/ITSEC at the Microsoft booth #1973 in Orlando this year. If you are interested in geospatial intelligence or the future of synthetic training & simulation environments you should definitely stop by and talk to us.

We reconstructed the entire planet in photorealistic 3D based only on satellite data, as seen in the award-winning Microsoft Flight Simulator 2020, and we have greatly enhanced our technology and extensive toolchain. This enables us to offer comprehensive end-to-end geospatial insights and 3D environments at scale.

Live-Labeling
The patented Blackshark.ai Live-Labeling tool allows super efficient data labelling for any kind of object type by combining semi-supervised learning plus instant visual feedback in a user interface as easy as it gets. Test it yourself how fast it is to label ships, buildings, roads or aircrafts with this tool in an interactive live demo at our booth. 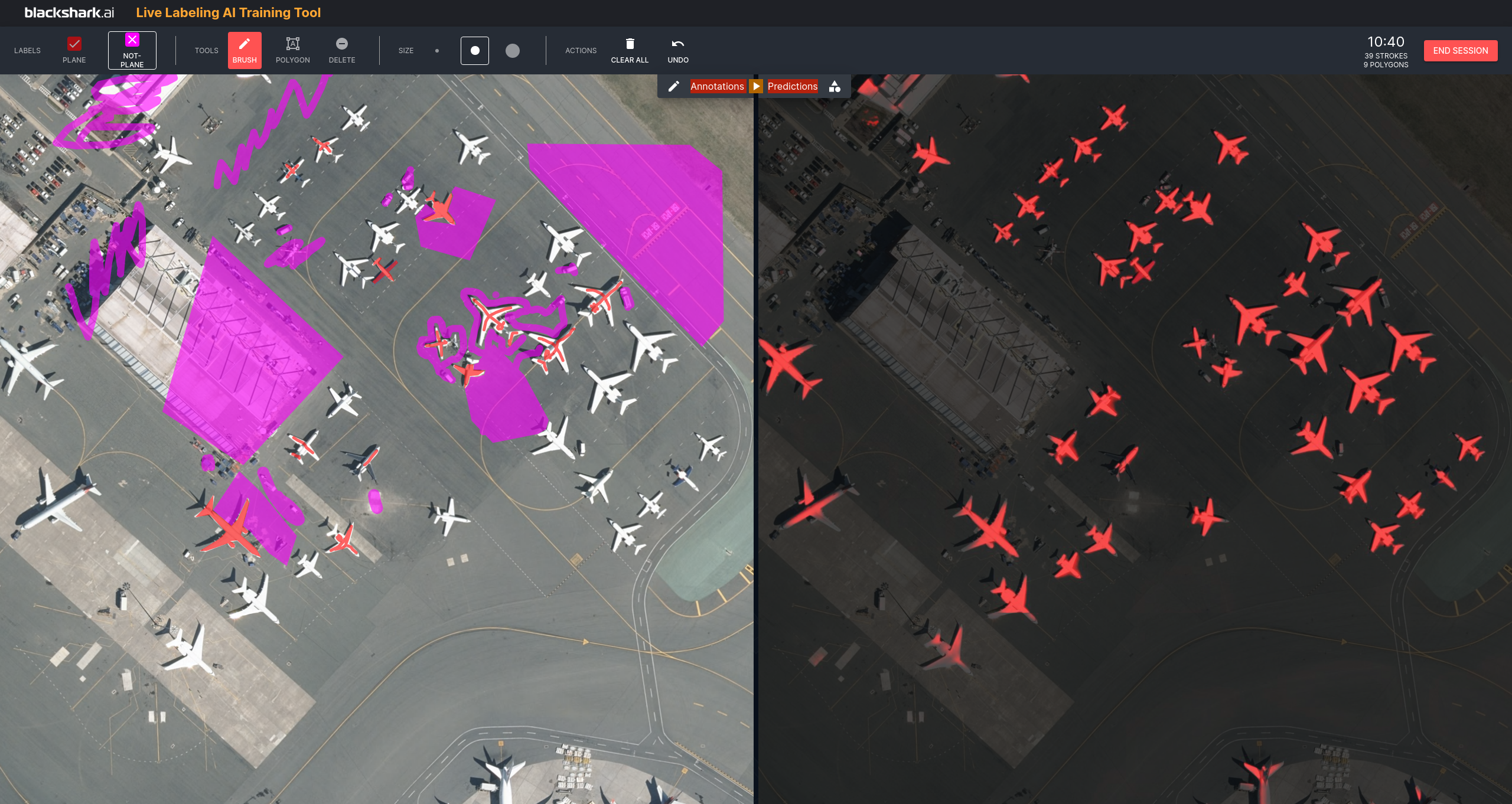 Geospatial Intelligence on Microsoft Azure and Private Clouds
Talk to us about how to get powerful geospatial intelligence easily running in your Azure environment or your private cloud. No matter what you want to find and detect – let our algorithms help you find the needle in the haystack.

Next-generation Synthetic Training Environment
We’ll be showing you examples of the future of synthetic training environments – a photorealistic 3D digital twin of our world, including semantic information and infinite detail. For the first time ever we are demoing our real-time generator for synthetic training data, placing objects such as aircrafts on airport runways, taxiways or gates to synthesize sensor ML training data in unlimited training scenarios. Attributes such as airport, aircraft types, time-of-day, sensor resolution or camera angle can be varied within given ranges easily and instantly.

Let’s consider airports as an example: there are unlimited amount of use cases possible using our scene generator to create synthetic training data, like changing the placement of objects, obstacles, weather conditions, time of day, and other parameters – we’re giving you the platform and the tools to place any object anywhere on the globe and develop your training and simulation scenarios. 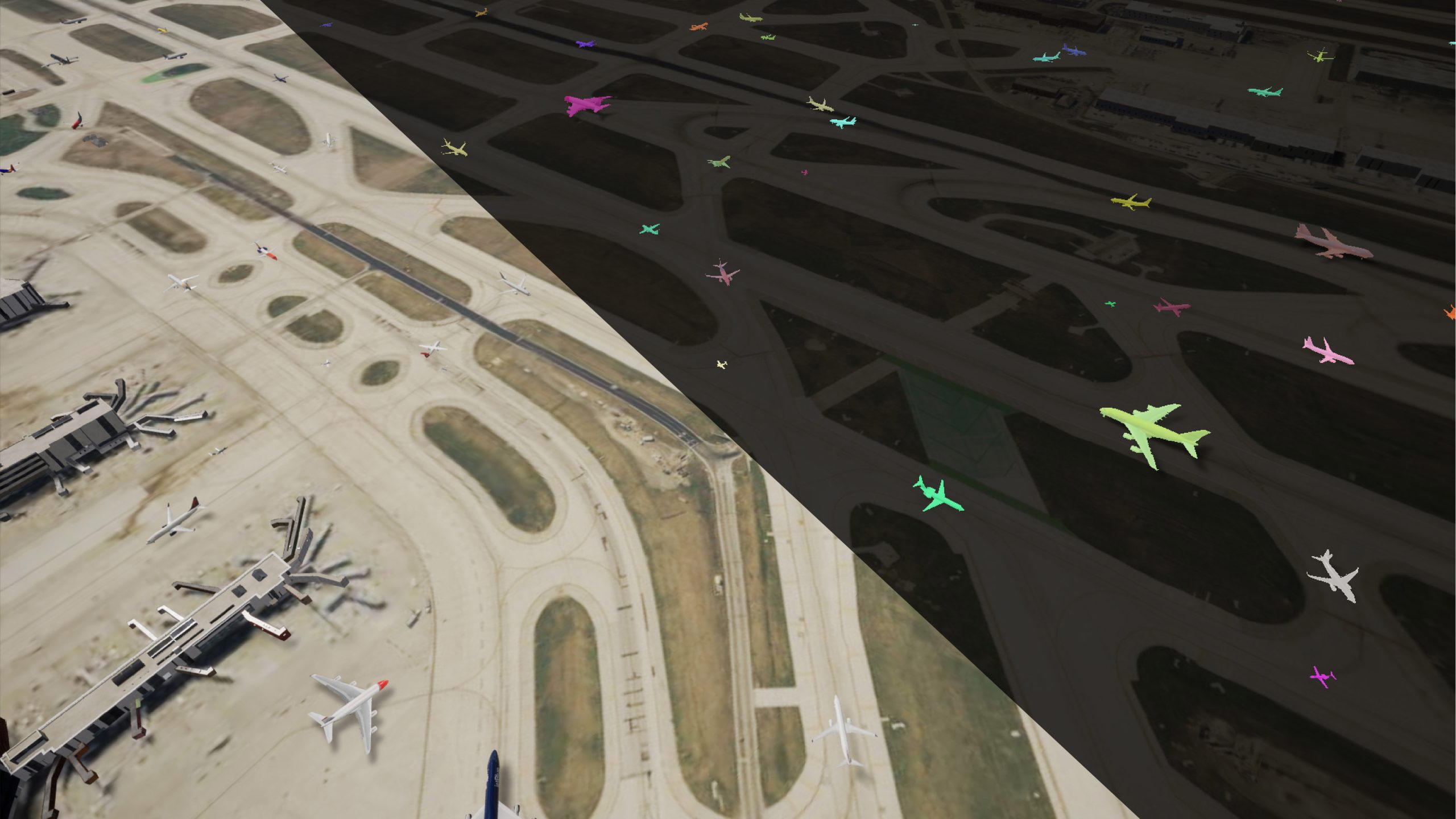 Reach out to inquiries@blackshark.ai to book an exclusive session with the Blackshark.ai executives in our exhibitor suite, or stop by our booth at #1973 Microsoft.

Blackshark.ai Announces $20M Round of Funding

Blackshark.ai debuted just last year with its contribution to Microsoft Flight Simulator, which represents the entire planet in photorealistic 3D by building on top of massive computation power and a novel approach to Artificial Intelligence. The technology blackshark.ai developed has since launched as a platform making geospatial data and 3D simulation environments available at global scale. Applications running on the blackshark.ai platform include use cases for government, geospatial intelligence, humanitarian relief, metaverse/AR, simulation for autonomous driving and flying, deforestation monitoring, insurance, smart cities and more.

Michael Putz, co-founder and CEO of blackshark.ai, explains: “Our platform can process petabytes of satellite data in near real-time and accurately extract semantic information such as building footprints/heights, land use, bodies of water or infrastructure assets such as streets or rail tracks.” This information alone is valuable for many industries and is used as an additional layer of input for the blackshark.ai platform to ultimately reconstruct the physical world in 3D. “These 3D environments are not just beautiful to look at, but given the availability of semantic information they can be queried, searched, updated rapidly and changed for simulation purposes in an instant. This is immensely powerful and really sets the product apart from anything else I have seen”, says Brian McClendon, co-founder of Google Earth on joining the company’s board of advisors.

The US/European founding team has quickly been able to attract large customers globally and is scaling rapidly. “Like many others, I first came to know about blackshark.ai’s capabilities based on their contribution to the new Microsoft Flight Simulator, but it quickly became apparent that the applications of their tech extend far beyond gaming,” said M12 Managing Director Samir Kumar. “Blackshark is a unique intersection of AI-based semantics extracted from geospatial mapping data at planet scale that can be combined with generating high quality synthetic 3D structure data from 2D satellite imaging using procedural generation techniques. Taken together, Blackshark is on its way to developing a new kind of semantic 3D base map of the whole planet including a digital twin of all structures on the surface of the earth!” Sri Chandrasekar, Managing Partner at Point72 Ventures adds: “We believe blackshark.ai’s cutting-edge technology is creating an incredibly valuable asset for the future. A digital twin of Earth opens up new opportunities to interact with the world around us and helps meet the growing demand for geospatial analytics and solutions.”

Raised funds will be used to accelerate the accessibility of the blackshark.ai platform across industries by further ramping up the global go-to-market team as well as on data scientists and developers. “Our vision is to democratize access to geospatial data and to help enable the next generation of technology that will build on top of a digital twin of our physical world”, says Michael Putz looking forward.

Point72 Ventures is a global venture capital strategy led by a diverse set of domain experts with the capital and mandate to lead rounds through all stages of a company’s growth, from idea to IPO. The team invests in founders with bold ideas who use the latest technologies to drive transformational change across industries. Point72 Ventures offers entrepreneurs access to expertise and insights, executive and technical talent, and hands-on support. With offices in the U.S. and Europe, Point72 Ventures is an affiliate of Point72, the global asset manager founded by Steven A. Cohen. For more information, visit p72.vc.

Blackshark.ai are the brains behind a vast open world and semantic 3D map as seen on TechCrunch. Accomplishing this global-scale 3D representation of our planet requires massive cloud computing, a novel approach to Artificial Intelligence for feature detection and procedural rendering technology, all combined creating a photorealistic 3D digital twin of our world, generated automatically from satellite imagery as input data only.

To make this patented technology accessible to empower countless industries, Blackshark.ai has chosen Epic Games’ Unreal Engine as the first game engine that they will support, putting the whole globe into anyone’s hands. The Blackshark.ai Globe Plugin provides access to a semantic 3D digital twin as well as to a realistic synthetic training and simulation environment. Both solutions unlock use cases for various industries and applications such as professional simulation and training, governmental geospatial services, humanitarian relief, metaverse innovation, insurance, real estate, AEC, and 3D mapping.

The AI-detected information about the terrain, buildings, infrastructure, and vegetation of the entire globe is streamed from the Blackshark.ai servers into the Globe Plugin for Unreal Engine, and is then rendered in real-time and can be used via an API at the same time. With the plugin, customers are able to combine their own worlds using Unreal and new architectural designs can for instance easily be integrated into realistic city scenes, or large-scale prebuilt scenes can quickly be combined with Blackshark.ai’s entire globe. At the same time, the semantic data representation makes it easy to filter for specific building aspects like building types, heights, or roof slopes or even simulating large-scale energy reduction effects through shading or insulation measures. 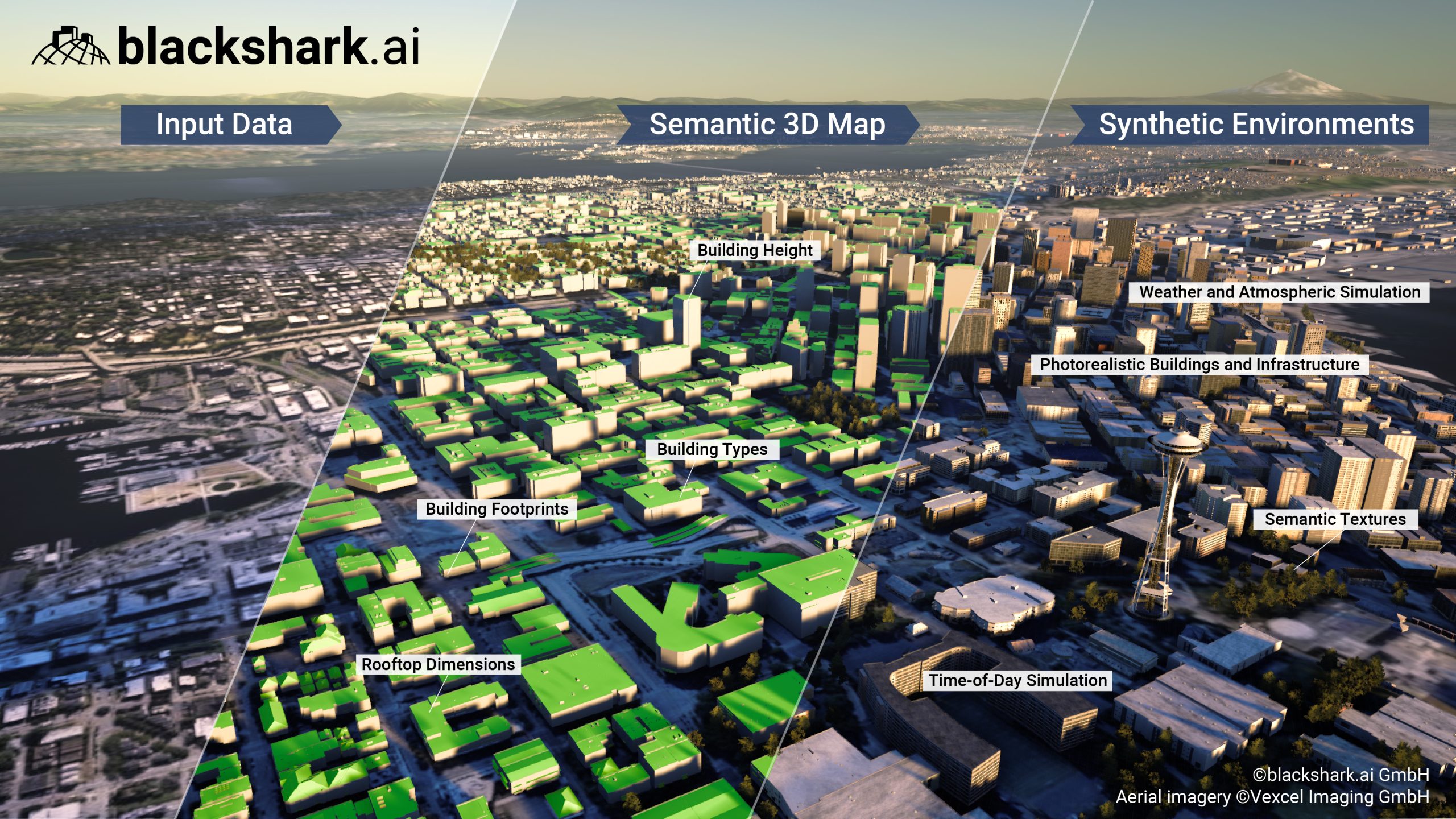 Digital Twin USA – Seattle rendered in the Blackshark.ai Globe Plugin for Unreal Engine as a semantic 3D map and as synthetic environment

The Blackshark.ai Globe Plugin is currently available in closed beta upon request. Several companies have already been integrating the Globe Plugin and SDK into their simulation tool chain in close partnership with the development team. General availability in the Unreal Engine Marketplace is planned for early 2022.

The plugin will be free and a demo version on the Unreal Engine Marketplace will contain certain example cities and areas including terrain, buildings and vegetation. Larger scale semantic 3D maps and synthetic training environments will be available on a yearly subscription model, with license fees depending on the size of the area of interest (city-scale up to the whole globe) and number of included data layers (terrain, buildings, vegetation, waterbodies, roads, etc.).

Blackshark.ai recently received an Epic MegaGrant, which will be used to accelerate the development of the plugin. More details about the availability of the Blackshark.ai Globe Plugin will be announced closer to the launch of Blackshark.ai’s “Global Digital Twin”.

Stay tuned — the whole world will soon be in your hands.